Whenever we share our apple pies, people ask how we got it to taste so good.  Do we use a special secret ingredient?  Maybe reduced cider or spike it with a liquor?  Nope, all it takes is ditching the cinnamon that a lot of people think is required in an apple pie.  Without cinnamon demanding your tongue’s attention, the power of the apple comes through and it is simply stunning.  Cinnamon and apple can be a good combination, but we’d like to invite you to a world where the apple pie actually tastes like apples. 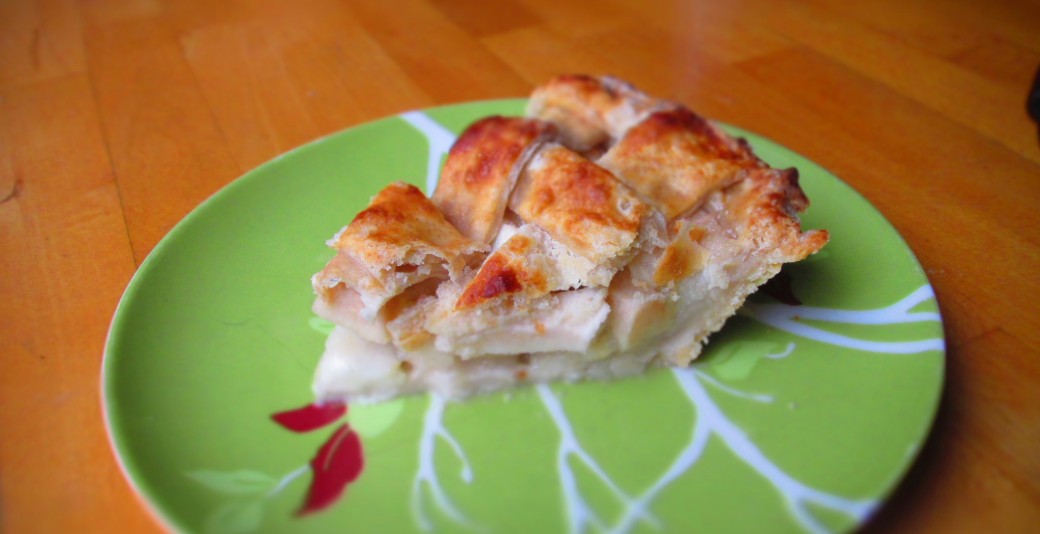 It’s not that cinnamon is bad, far from it. Amy and I are actually cinnamon snobs, using only Vietnamese cassia that we grind ourselves instead of the cheap bitter powder at the grocery store most people use. But when it comes to apple pies, cinnamon is taking up too much of the stage which should really belong to, well, the apple. It’s gotten to the point where you could even argue that some apple pies should be called cinnamon pies.  Cinnamon is just that potent.

This will come as no surprise, but I feel like I have to say it. Apples actually taste amazing on their own. The compulsion to add cinnamon to every autumn recipe with the fruit has become so overwhelming that people forget that a good pie apple has a strong flavor that doesn’t require the sharp contrast of cinnamon to balance things out. Key phrase: GOOD APPLE.

The path to a great apple pie without cinnamon

First and foremost, you have to select a good apple. Don’t just grab the prettiest apple or the one you like to snack on. Think about the end result, a full flavored pie that shouldn’t need to be balanced with sharp flavors.

The ideal pie apple will be firm, but not too crisp. If you find that you really like an apple but it often results in a more applesauce-like filling, you might be able to solve the problem by using thicker chunks of apple instead of thinner slices. Avoid using a corer-peeler-slicer for a pie, unless you like that applesauce texture.

Ideally you want an apple you enjoy when it’s fresh. It should have a confidence in its flavor and aroma, too. And, I think this is key, it needs to be somewhat tart. This is a dessert, after all, and pie filling will have sugar. A tart apple balanced with sweetness is the ideal pie for me, where you are presented with a broad spectrum of flavor for your tongue to savor. And if you bake a pie that is too sweet or too tart, make note of it and adjust sugar amounts as needed. You can even add lemon juice to bring some tartness to the table without it overpowering the apple flavor (lemon juice isn’t as bossy as cinnamon!).

You don’t have to use just one kind of apple, or even slice all the apples in the same way. I don’t think we ever make the same pie twice and that diversity will keep the pies interesting. By cutting apples into different shapes and sizes, some of the apple slices will be so tender they melt on your tongue, while others will present you a with pleasant bite to release the juice. If you use multiple varieties of apples, you expand the experience further by bringing worlds of flavor and texture to each forkful. I like to think of apple pies like a beer, where you can use a single hop to emphasize its characteristics, or you can use a blend of hops to bring complexity to the flavor and create something really unique.

I hope I’ve helped prepare you for apple season. I’m already dreaming of the apples to come this fall, with their crazy variety of flavors, texture, and even colors. I’m not even thinking about cinnamon at all.

We recently snagged a box of early apples from a local farmer and they are so great for a pie. They are firm, young McIntoshes and have a great balance of sweet and tart. So we’re making pies. Here’s our go-to recipe, adapted from Jeffrey Steingarten’s as presented in the excellent book, The Man Who Ate Everything.

1. Prepare a crust or make sure you have one ready.  Grease your pie pan with butter, lard, or shortening, roll one pie crust out, and line the pie pan, cover with plastic, and refrigerate.  You can see how to do this in our pie crust post by clicking here.

2. Peel the apples, and as you finish each, put them in a water bath with 2 of the tablespoons of lemon juice in a large bowl.  This prevents them from browning as you work.

3. Drain the apples and set aside, discarding the lemon water.

4. Mix together all of the filling ingredients in the large bowl.

5. Cut the apples into 16 pieces.  For larger apples, standard slicing into wedges is fine. For smaller apples, we like to cut into 8 wedges and then half the wedges crosswise to create chunks.  This gives the pie a dynamic texture that broadens the mouthfeel and experience! 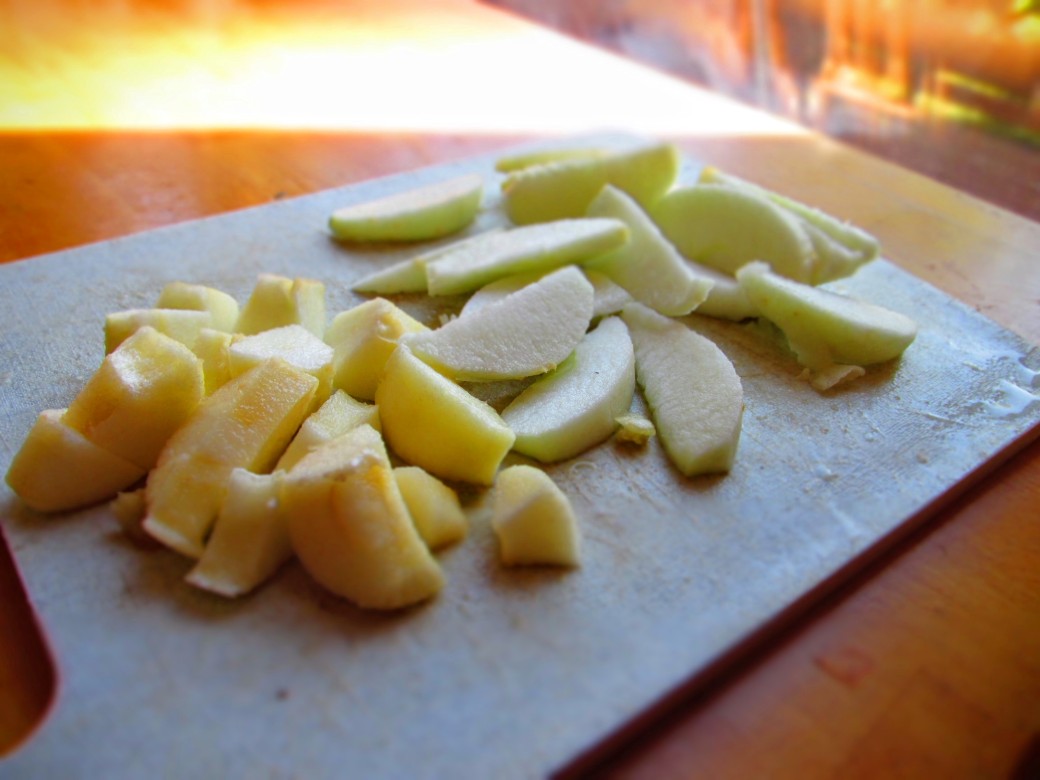 6. Stir the apples into the rest of the filling ingredients.

8. On a generously floured surface, roll out the other pie crust and slice into strips about 3/4-1 inch wide.  While you do this the filling will release juice which is important to avoid a soggy pie, so if you don’t want to do a lattice top be sure to let the apple mixture stand for about 10 minutes!

9. Gently arrange the apple mixture in the pie pan lined with dough, pressing it down gently to reduce air gaps.  You want the filling to rise just above the rim of the pan on the outside, without touching the top edge of the crust. 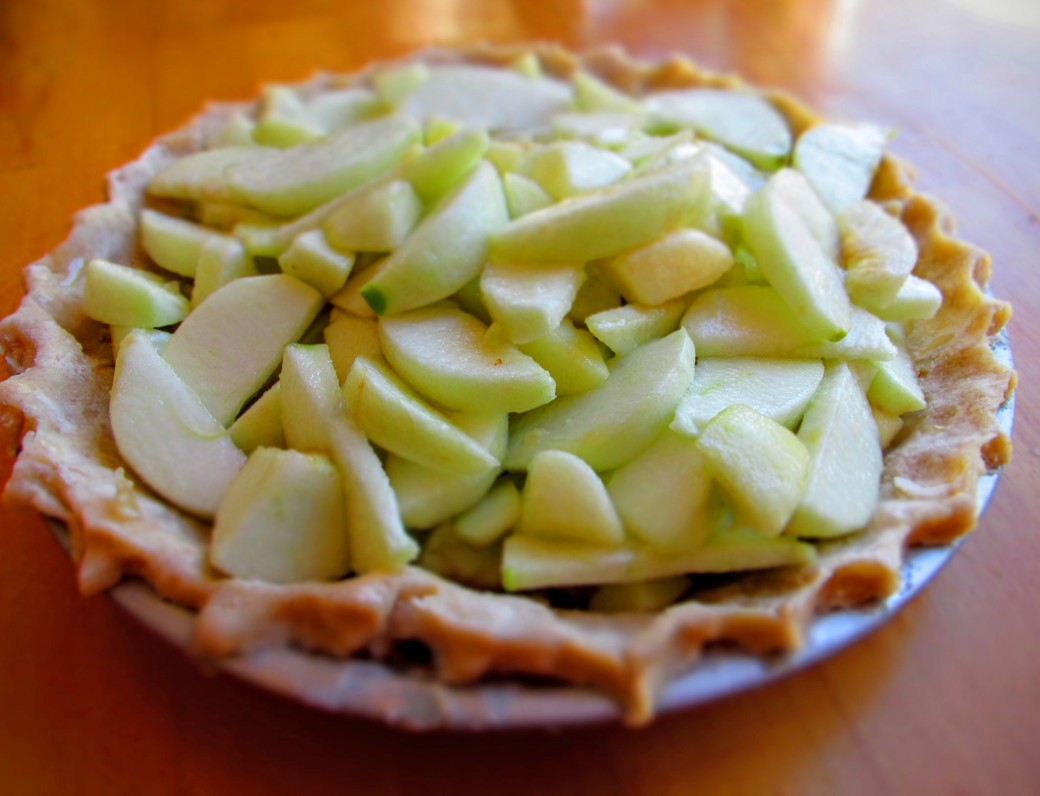 10. Build the lattice top by placing strips across in one direction with about a 1/2 inch gap between each. 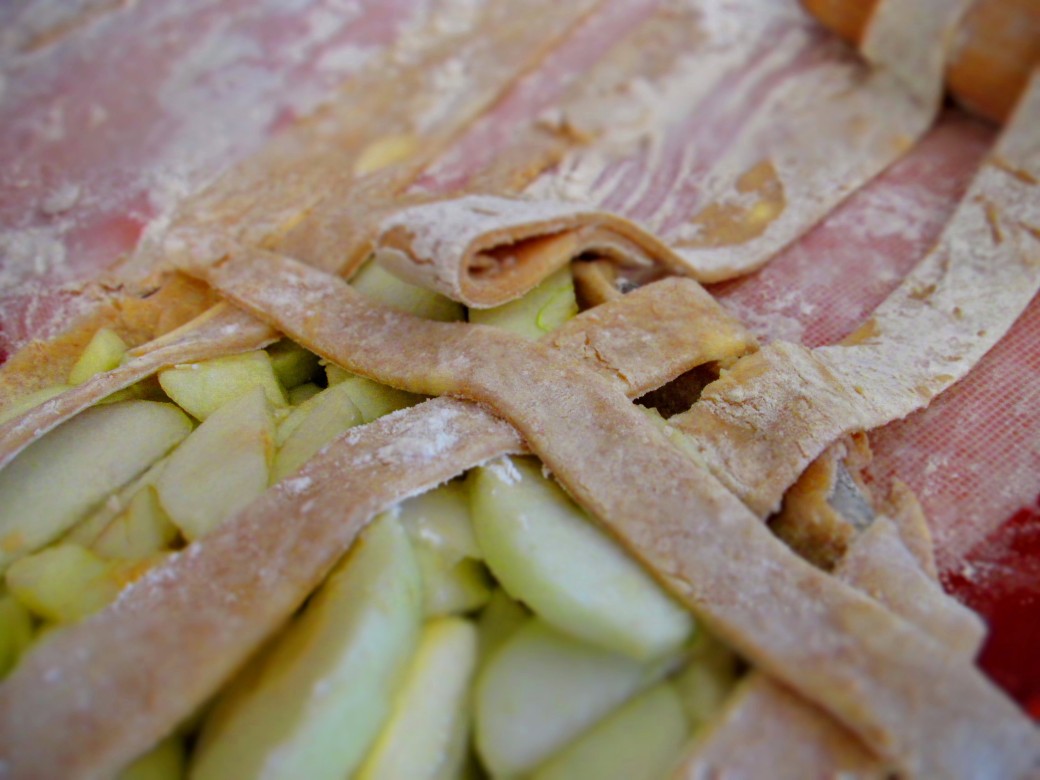 Then fold back every other strip so you can lay another strip across.

Bring the folded back strips back to cover the entire pie (and the newly placed strip), then fold back the other strips you didn’t fold back previously.

Repeat this process until the pie is covered.  Trim off any excess crust and press the edges of the lattice strips into the top edge of the bottom crust to seal.

11. Brush to top of the crust with milk, then sprinkle with granulated sugar. We used our granulated maple sugar. 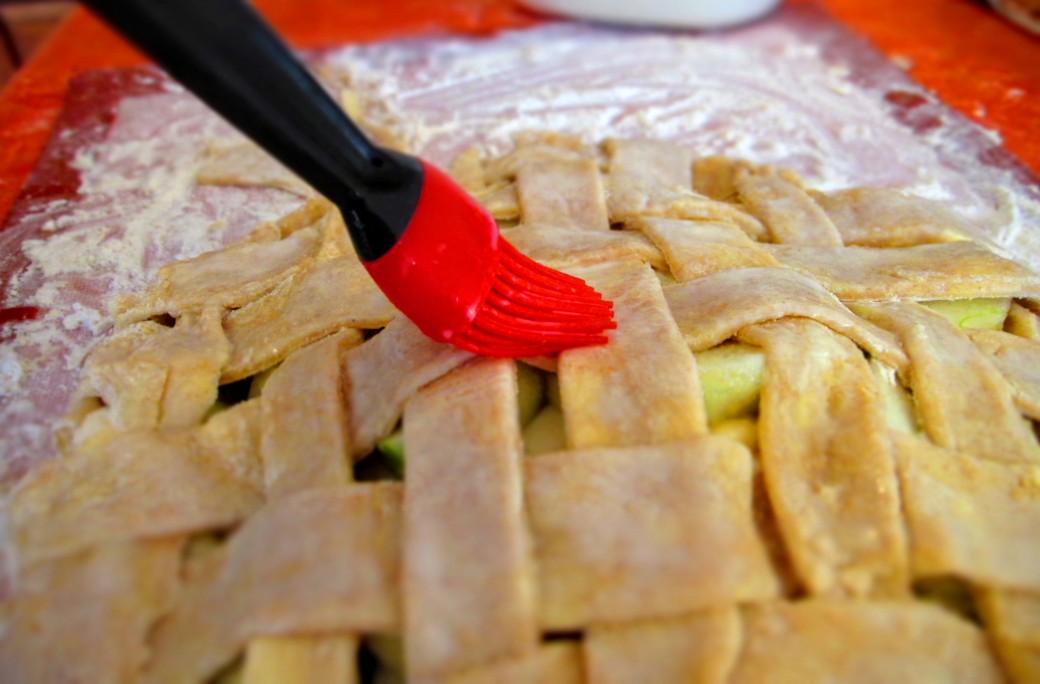 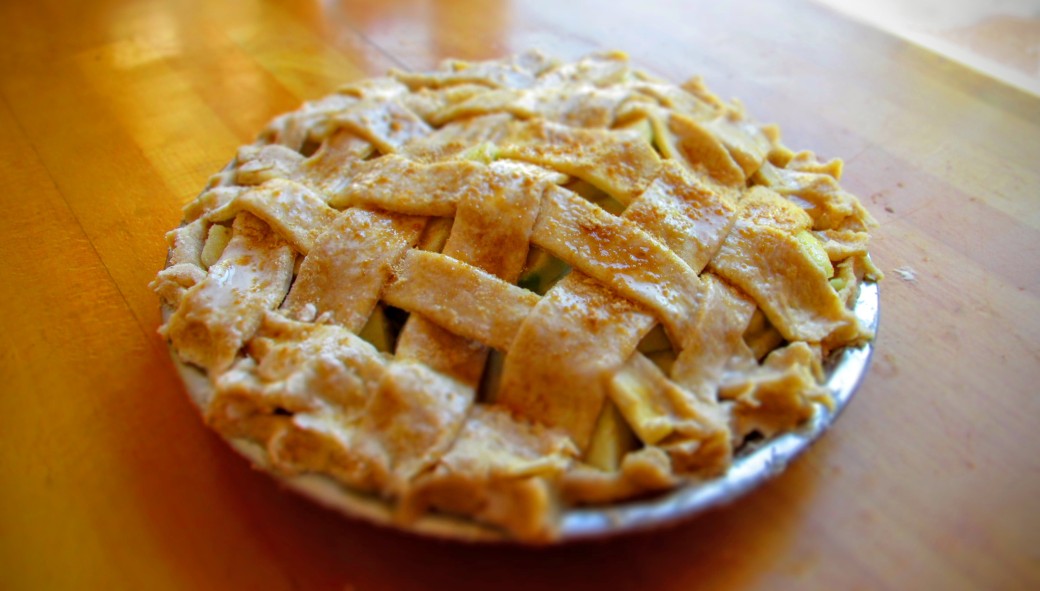 12. Place the pie in the center of the preheated oven and bake for 20 minutes.  You may want to put it on a baking sheet or piece of aluminum foil to catch any drips.

14. Check the pie to see if the top is getting dark.  If you notice that some spots are getting very dark, nearing the point of burning, cover the pie loosely with a piece of foil.

15. Bake for another 20 minutes, or until the pie is golden brown and the filling is just starting to bubble.

16. Allow to cool for at least 2 hours before serving.  It will be even better the second day.

Got leftover pie crust dough scraps?  Don’t let them go to waste! Click here for our recipe to turn them into our sweet Berry Swirl Pie Cookies!

Looking for more recipes for your holiday dinner?  We pulled together a complete menu with easy to prepare, local recipes that showcase farm raised ingredients in their pure form.  Click here to take a look!